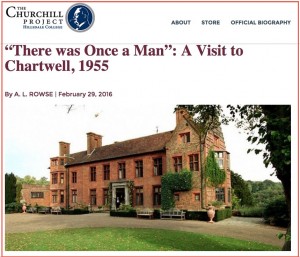 Chartwell, 1955— Here is one of the finest—as it is the most revealing—portraits of Churchill at Chartwell we can read, by the Oxford his­to­ri­an A.L. Rowse, who spent a mem­o­rable day at Churchill’s home.

It gives an insight­ful view of Churchill and Chartwell ten years after World War II, not with­out pathos and sad­ness, for even now he was begin­ning to reflect that he had “achieved a great deal, only to achieve noth­ing in the end”: a thought how­ev­er incon­ceiv­able in his case, but worth pon­der­ing by us all. Read full arti­cle at Hills­dale Col­lege Churchill Project.

At lunch he talked pol­i­tics, politi­cians, the war….if the Ger­mans had invad­ed the coun­try and the gov­ern­ment had had to scat­ter, he had it in mind to form a tri­umvi­rate with Beaver­brook and Ernest Bevin. For anoth­er: he had thought of a slo­gan to broad­cast in case of invasion—“You can always take one with you.”

We talked of the sink­ing of the Bis­mar­ck. He spoke affect­ing­ly of how bad it was to wake up in the morn­ing and hear the news of the sink­ing of a great British ship. “What was the name of that ship?….Yes, the Hood,” he said, tears in his eyes.

Then: “We had to get the Bis­mar­ck: the nation expect­ed it. One admi­ral said his ship hadn’t enough oil to get to the spot and back again. I sent the telegram, “You get there and we’ll tow you back.” This remind­ed me of Hawke’s reply to the pilot warn­ing him of the rocks and reefs of Quiberon Bay:

“Mas­ter pilot, you have done your duty—now lay me along­side of the enemy.”

Chartwell lunch: “Have some Cointreau…”

Lunch pro­ceed­ed, rather bur­den­some for a teetotaller—I didn’t dare to be one, alone with Churchill. There had been Bris­tol Cream before lunch, a very good hock dur­ing lunch. I drew the line at port—port, at lunch! “What? No port? Then you must have some brandy.” (I can’t bear brandy.) “What? No brandy? Then you must have some liqueur with your cof­fee. Have some Coin­treau: it’s very sooth­ing.” I had some Coin­treau: it was very soothing.

Slight­ly soz­zled, I tot­tered upstairs while he read from my book, The Ear­ly Churchills. “Very good,” he chirped. Or, “Quite right….Quite right about James I’s exe­cu­tion of Raleigh: I have always thought that one of the worst blots against that—extravagant—sodomite” (this with rel­ish at get­ting out the phrase).

I had been rather hard about King Charles I. More gen­er­ous, Churchill said, “We don’t con­sid­er how much more dif­fi­cult things were for them in the past—so much eas­i­er for us. We have all the ground pre­pared for us, civ­il ser­vants to hand up the mate­ri­als for us to make the deci­sions. Ear­li­er, peo­ple had to cope with every­thing them­selves, where we have spe­cial­ists, a machine upon which things move for us.” It was salu­tary to have this orig­i­nal com­ment from a great man of action, who knew well from expe­ri­ence the dif­fi­cul­ties of get­ting things done; I reg­is­tered it—and reserved my own opin­ion of Charles I.

“To have been seduced at sixteen…”

But there was a bet­ter one short­ly about hand­some John Churchill’s affair with Lady Castle­maine: “To have been seduced at six­teen by the King’s mis­tress must have been an inter­est­ing and—[reflectively] valu­able expe­ri­ence.” (See also “The Dal­ly­ing Duke.”)

I left in late after­noon. Beaver­brook was com­ing down to dine and spend the evening, till then he was going off to bed. Evening sun poured from the west into the front door, upon the flow­ers, the head of Roo­sevelt sculpt­ed in wood, the aged bulky fig­ure wav­ing goodbye.

I sank back exhaust­ed in the lord­ly car, thrilled by it all, a last glimpse of the flag over Chartwell—and went back to Oxford to write it all down. It is only today, very many years after, that it occurs to me that he thought I would, and meant me to.