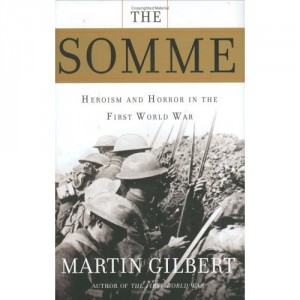 Sir Mar­tin Gilbert’s mov­ing book, The Somme: Hero­ism and Hor­ror in the First World War, ends with vers­es from “Willie McBride,” by the Scot­tish-Aus­tralian song­writer Eric Bogle, which car­ry an ever­green mes­sage to all gen­er­a­tions, and cap­ture what Churchill thought of mod­ern war—which he tried so hard, before both World Wars, to avoid.

Sir Mar­tin wrote that in research for the book, he and Lady Gilbert found the grave of Pri­vate William McBride, Roy­al Inniskilling Fusiliers, killed April 1916, two months before the Somme. Whether this was the grave of Eric Bogle’s sub­ject is imma­te­r­i­al. They sat down next to it and Sir Mar­tin recit­ed the soft, sad words:

Well, how do you do, Pri­vate William McBride.
Do you mind if I sit here down by your graveside?
I’ll rest for a while in the warm sum­mer sun
I’ve been walk­ing all day, and I’m near­ly done.

Did they beat the drum slow­ly; did they play the pipes lowly;
Did the rifles fire o’er you as they low­ered you down?
Did the bugles sound The Last Post in chorus:
Did the pipes play The Flow’rs of the For­est?

I have quot­ed the first two vers­es and cho­rus, but the song is Mr. Bogle’s and the com­plete lyrics may be found on his website.

You might think me crazy, you might think me daft,
I could have stayed back in Erin, where there wasn’t a draft,
But my par­ents raised me to tell right from wrong,
So today I shall answer what you asked in your song.

Yes, they beat the drum slow­ly, they played the pipes lowly,
And the rifles fired o’er me as they low­ered me down,
The band played The Last Post in chorus,
And the pipes played The Flow’rs of the Forest.

Ask the peo­ple of Bel­gium or Alsace-Lorraine,
If my life was wast­ed, if I died in vain.
I think they will tell you when all’s said and done,
They wel­comed this boy with his tin hat and gun.

These lyrics are the copy­right of Stephen L. Suf­fet, 1997, and the song may be heard on YouTube.